Last Saturday I decided to visit an area of Oxford that I don’t normally do, Osney Island. It says so in its name, but not many people realise this is in fact an island.
Located on the west of Oxford, Osney is surrounded by the River Thames. One of its landmarks is its abbey, which is nearly 900 years old! Unfortunately, the building is no longer in use, but you can hear its ancient bell right in the city centre: Christ Church’s bell was originally Osney Abbey’s.
I went to Osney Island because Low Carbon West Oxford, together with Osney Hydro, had organised a free art trail around the river. The aim was to give local people the opportunity to learn about ecology, but also to show them what the river Thames has to offer.

There were so many different things to visit that I didn’t know where to start! I decided to find some window displays around the island, and Osney didn’t disappoint. I found many examples of river and water-related displays, but these were my two favourite ones: 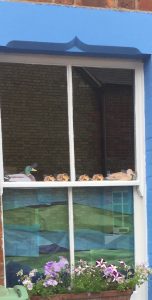 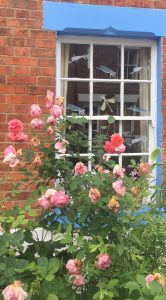 The first one displays a family of ducks using the river as its home. I’m sure you have had the chance to see many duck families waddling around the rivers and canals if you study English in Oxford.
The second window shows some dragonflies flying over the river. Even though they are difficult to be seen, it’s not impossible!

I also went to the West Oxford Community Centre, where they had an “Enough” sign created by LCWO. This sign represents all the plastic thrown into the river and how it destroys the ecosystem.

As a bonus, there was a fair! They had ping pong tables, a few animal shows, some dancing competitions and several stalls where you could purchase different refreshments: tea, coffee, cakes…
It was a perfect day in the beautiful city of Oxford, walking by its rivers and canals, discovering new picnic spots.
And you? What will you next discover?