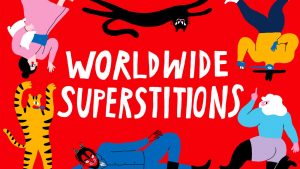 After having been learning English in Oxford for a while, our Advanced class have experienced several cultural differences, one of them, superstitions.

Because it is Friday the 13th, the students in the Advanced class wrote about superstitions in their home country. All of them are very different from the ones here in the UK. Enjoy what these students have to say about scary, or sometimes funny, superstitions from around the world.

If you cut your nails with clippers at night, you might lose an opportunity to meet your parents when they are dying. I used to cut my nails whenever I wanted but after hearing this superstition, it makes me hesitate although it is obviously just a lore. According to an article, it is believed that cutting tools such as clippers or scissors have spiritual power especially at night. ‘A gap’ which is made by those tools when it is used allows evil to enter the gap and bring on bad luck. Personally, I guess that this tradition started ages ago when people lived in houses which had thin wooden walls. A noise by clippers at night could have been a distraction from sleeping. They would have tried preventing this unacceptable behaviour using a spooky story.

In the past, superstitions were common in Arabic culture. Nowadays, most people who are from Arabic countries do not believe these superstitions for many reasons. One of them is that a lot of Arabic people are religious. For example, in Islamic rules, there is no one who knows what will happen in the future accept God. Before Islamic times, there were a lot of superstitions that were believed in Arabic culture. For instance, if a person saw a black bird in the morning, he would have a bad day. Another reason for not believing superstitions is the development of science. In the past, they believed that most diseases could be treated by ironing, but now most of them do not believe in that.

Indeed, every country has its own traditions and rituals that people use to attract good fortune or repel bad luck. In Colombia many people are actually quite superstitious and will go out of their way to avoid an unlucky circumstance. Nonetheless, it is an important part of their day to day life. One particular example would be the Aloe Vera plant. For a long time, the plant was supposed to be a lucky charm that protected the house from bad energy.

If your plan is travel to Colombia soon, you have to be aware of some kind of things. You should never put the saltshaker directly in someone’s hand. It’ll bring you bad luck. Instead, put in on the table where they can reach it. Secondly, if you are invited to a wedding, avoid giving knives or scissors as presents unless you want to cut them from your life. Furthermore, you will never see them again. At the end of the day you might like to rest, but remember, if your dog howls at night, he might be seeing a spirit. And if you sleep with your socks on, you will have a short life.

In addition to these travel tips, you might enjoy the next superstition. If your ears get hot, it means that someone is talking about you behind your back, so, be careful.

In the Netherlands we have this saying, wake up on the wrong side of bed. It means that you are in a very bad mood, but there are some people who take this saying a little too seriously. There is this historical story that says that you should always wake up on the same side of the bed as the night before, because if you don’t you have bad luck for the rest of your day. Furthermore, when you get out of bed with your left leg your day is completely ruined. It even goes as far as to say that you should make the bed in the morning otherwise you won’t sleep well that night. I personally don’t believe in these kinds of stories. It sounds to me like something my mother would tell me just to make me clean my room.

One of the oldest superstitions in my country, which I often saw in my childhood when I visited little stores in the neighbourhood, was that when your business hadn’t been successful, you used to put a lemon in the reception of the store. However, now this is largely forgotten. In the lemon, people put four matches, like the legs of an animal, and they made a small hole in the lemon and then put an ignited cigarette there. All of this was to call money into the store. Now people are changing this superstition, and they put a “lucky cat” in the reception to attract the customers.