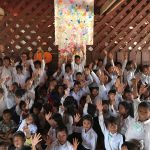 As part of our Giving Back Week, Melissa, Isabella and Abdul Nasser prepared a compelling and heartfelt blog post for one of the charities we were supporting, United World Schools. Thanks to all the hard work of the students we raised nearly £65!   Have you ever imagined a little girl waking up very early to go to work dreaming all day about how it would be to study instead of working? Maybe you have never thought about it because you have good opportunities. Let’s start with the £1 challenge. How can you spend £1? Maybe chocolate or just a sweet. That will end in a couple of minutes. If you don’t spend that pound and you give it to the charity. You can build the future of a child. What I’m saying is that with £1 you can support a child education for a week. How can we deliver £1 to children? Well, there is a charity called United World School (UWS). UWS has been working hard in favour of childhood education since 2008. Their purpose is to increase the number of schools in remote villages in poor countries.   It’s time to change the way you see the world. Your small action will make a huge difference.       By Melissa, Isabella and Abdul Nasser 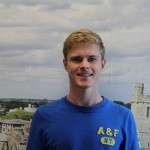 Luca Vonwyl is a 16-year old student from Swiss who participated in EC Oxford’s General English programme. He wrote about his experiences in the Student Testimonial. Here is Luca’s impression of the time he spend at EC Oxford to learn English: “I’ve chosen this destination because I’ve been here once, so I knew a little bit about the main attractions of Oxford. And the other reason is that I heard that Oxford has a lot of native speakers so that you can hear a lot of people talking in British English. I’ve arrived one month ago and now I can say: I feel more confident speaking to people I don’t know than I did in my first days. I also learnt a lot in my classes about grammar and vocabulary. I can practice my speaking as well. Besides, I like the fact that I can learn a lot of different things from other cultures because of the different nationalities at school. It’s very difficult to say which activity I liked most because every activity is brilliant. I think the best one is the coffee chat with other students and our teacher Callum. It’s very interesting because you can speak with other students and of course with the teacher who leads the conversation. Free biscuits and a cup of coffee make the conversation even a little bit more pleasant I like that our teachers use modern technology to work in class like beamer and white boards. For me, working this way makes the lesson much more interesting for me. What I like most about my accommodation is that I have my own room. I have to watch after myself now. It’s my job to keep my room clean. It’s a good possibility to take more responsibility for myself. I also like the … Read more 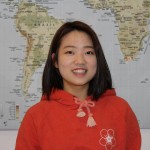 Jisoo Park is a -year old student from South Korea who participated in EC Oxford’s General English programme. She wrote about her experiences in the Student Testimonial. Here is Jisoo’s impression of the time she spend at EC Oxford to learn English: “I chose Oxford because the classical atmosphere and originality is so attractive to me. Surrounded by the elegant architectures and nice people I realised that I made the right decision. During my days here I could not only improve my English but also learn how to communicate with others with a variety of backgrounds. Even though I still have difficulty talking in English fluently, I got confident with speaking in this language. Not getting afraid of making mistakes and challenging for new activities are all priceless lessons I learnt. Staying with a host family, living by myself apart from my family and friends in Korea, and getting used to a totally new environment… I admit that every day was full of challenges but it turned out to be much more beautiful. I will miss my days here forever. Since I love watching musicals very much, when I came here to Oxford, I decided to watch as many musicals as possible. Departing in the morning on a bus, I watched Phantom of the Opera at Her Majesty’s Theatre last weekend. I could hardly understand the drama but it was so fresh and interesting that I totally forgot time flew. Watching the original stage which I had admired since my age of 9, I really felt happy about spending my last semester here. Nowadays, there are several new thing I have started. One is ready a book I borrowed at the library of EC Oxford. Also I have been working as a student ambassador at EC Oxford. Basically on Mondays, I … Read more 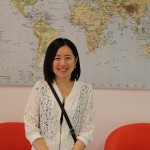 Yuka Sakai is a 21-year old student from Japan who participated in EC Oxford’s General English programme. She wrote about her experiences in the Student Testimonial. “At the beginning I just want to tell everyone I am happy to come to Oxford to study English. I have three reasons why I chose Oxford as a location to learn English. Firstly, I really love watching films, especially Harry Potter. Oxford is a film location for the Harry Potter films. It reminds me the films and the fantastic world. The ancient and magnificent buildings surrounding Oxford make feel as if I’m part of the harry Potter movie world. Secondly, I love the British accent very much. It’s really difficult to catch the words but I prefer British English. If you hear anyone speaking British English, I’m sure you will love it. The actor Hugh Grant is my favourite UK actor. I’ve been crazy about him since I watched Notting Hill. After that I was completely obsessed with the British accent. Thirdly, Oxford is not too urban but also not too rural. So I thought here is most suitable place for a long stay. Furthermore, you can take a bus to London at any time: so it’s easily to go to London. I think my speaking is better than before but I can still improve my vocabulary. I also try to write some letters or compositions to express my feels more naturally in English. Additionally, I attend the pronunciation clinic to make sure my pronunciation is correct. I will recommend EC Oxford to my friends because the staff and the teachers are friendly. I like EC teachers: they are humorous and delightful. When I sometimes can’t understand anything then they kindly teach me until I fully understand. I made a lot of friends who … Read more 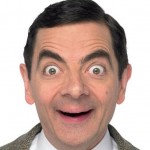 Rowan Sebastian Atkinson, (born 6 January 1955) is an English actor, comedian, and screenwriter best known for his work on the sitcoms “Blackadder” and “Mr Bean”. He was listed in “The Overserver” as one of the 50 funniest actors in British comedy and amongst the top 50 comedians ever, in a 2005 poll of fellow comedians. He has also had cinematic success with his performances in the “Mr. Bean” movie adaptations “Bean” and “Mr. Beans Holiday”  and in “Jonny English“ (2003) and its sequel “Johnny English Reborn” (2011). It has been 25 years since Rowan Atkinson first introduced the world to the affable Mr Bean and he marked the show’s milestone anniversary with a celebration at Buckingham Palace, London. The 60-year-old actor-comedian rode up to the London landmark in character, atop his famous 1976 British Leyland Mini 1000, reported Entertainment Weekly. The arrival recreated a memorable scene from the show, in which Mr Bean packs his vehicle so full of shopping purchases that he needs to find an alternative way to drive it. The car had a #MrBean25 hashtag commemorating the show, which ran from 1990 to 1995 and inspired a spin-off animated series and two feature films. There was also a cake and lots presents for the occasion, and Mr Bean’s best friend, Teddy, came along for the ride. As an EC Oxford students keep your eyes open when you pass Oxford streets because you might spot him walking through Oxford. One student met him and said “Mr. Bean” was really friendly and kind. Surprises like these make Oxford a unique place to study and to live in. They will put a smile on your face for the rest of the day and make your stay unforgettable. Rowan Atkinson: “I have always regarded Mr. Bean as a timeless, ageless character, and I would rather he be remembered as a character mostly in … Read more 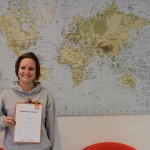 Aurelia Gienal is a 18-year old student from Swiss who participated in EC Oxford’s General English programme. She wrote about her experiences in the Student Testimonial. Here is Aurelia’s impression of the time she spend at EC Oxford to learn English: “I want to mention that I’m really sad about leaving. I had an awesome time here and all the people, teachers as well as student and the staff of course. I chose EC Oxford because I wanted to go to a city which is not too busy and I have the possibility to visit London at the same time. The next step was to choose a school. For me, the description of EC suited me the best. In my opinion it’s difficult to improve your English language skills when you already have a high level. In this situation you just have to use it to improve so that it comes automatically. And that is actually what I learnt or improved in. I think the best thing about the lessons is the mixture it has. It is still school with all the grammar and vocabulary but it’s also about speaking and speaking again: not only about the grammar but also about usual subjects. And you have the opportunity to meet new students in the clinic lessons or Café chat who are not in your class. I really enjoyed the ‘special’ lessons. During my stay I lived in a host family. For next time I would probably choose the residence. For younger students a host family is maybe better but if you reached a certain age then you are more free when you live in a residence. I definitely recommend EC Oxford to my friends. The staff and the teachers are really friendly. You can learn a lot and the whole team of … Read more

Gloria Gimenez Jordan is a 22-year old student from Spain who participated in EC Oxford’s General English programme. She wrote about her experiences in the Student Testimonial. Here is Gloria’s impression of the time she spend at EC Oxford to learn English: “I chose EC because a friend recommended it to me. He told me it was a good school and now I know he was right. During the time I spend here I really improved my English language. But the best thing for me is that I became more fluent in speaking. What I liked most about the lessons were the different kind of activities that we did; like playing games, watching parts of movies and doing exercises. I liked the nice people at the reception they were always able to help me any time I needed help. I did many friends here, who are from Italy, France, Germany and the Czech Republic. I’ve learnt a lot from them. I’ll remember the good atmosphere in school and all the special people that I’ve met here.”