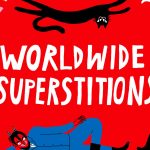 After having been learning English in Oxford for a while, our Advanced class have experienced several cultural differences, one of them, superstitions. Because it is Friday the 13th, the students in the Advanced class wrote about superstitions in their home country. All of them are very different from the ones here in the UK. Enjoy what these students have to say about scary, or sometimes funny, superstitions from around the world. Mari about Japan: If you cut your nails with clippers at night, you might lose an opportunity to meet your parents when they are dying. I used to cut my nails whenever I wanted but after hearing this superstition, it makes me hesitate although it is obviously just a lore. According to an article, it is believed that cutting tools such as clippers or scissors have spiritual power especially at night. ‘A gap’ which is made by those tools when it is used allows evil to enter the gap and bring on bad luck. Personally, I guess that this tradition started ages ago when people lived in houses which had thin wooden walls. A noise by clippers at night could have been a distraction from sleeping. They would have tried preventing this unacceptable behaviour using a spooky story. Saqar about Saudi Arabia: In the past, superstitions were common in Arabic culture. Nowadays, most people who are from Arabic countries do not believe these superstitions for many reasons. One of them is that a lot of Arabic people are religious. For example, in Islamic rules, there is no one who knows what will happen in the future accept God. Before Islamic times, there were a lot of superstitions that were believed in Arabic culture. For instance, if a person saw a black bird in the morning, he would have a … Read more

This week at EC Oxford our theme is: Are you afraid of the dark? Next Friday it is Friday the 13th, which is an unlucky day here in the UK. Because of this scary and spooky day, our theme this week is also spooky. And we have planned lots of scary stuff for our students. Read here all about the fun things we organised for our students this week and if you want to join, don’t forget to sign up at the reception. Monday: On Monday we welcome our new students at 2.35 on the students’ lounge. Join us and say hi to our 8 new students of this week. Afterwards we have homework club with Lorna at 2.45. She can help you with your homework but also with any problems or questions you might have about English. Tuesday: The 9th and 10th of September the St Giles’ fair is held in Oxford. On Tuesday Adam will take you to the fair and will show you around. If you want to join, meet him at the reception at 3 pm. There is so much to see and do. It is like a mini amusement park, right in the city centre. This fair is only held once a year, so you don’t want to miss it. Wednesday: On Wednesday we will have a superstitions clinic with Cassandra. She will tell you all about superstitions in the UK and you can talk about superstitions in your country. You can learn a lot and have fun, so be sure to sign up. Thursday: This Thursday Iris is taking you to the Pitt Rivers Museum. The museum has very creepy stuff on display about death, religion and witchcraft. They have masks, clothing, weapons and here you can also see the famous shrunken heads. Friday: … Read more