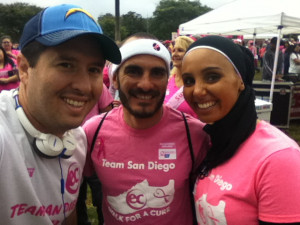 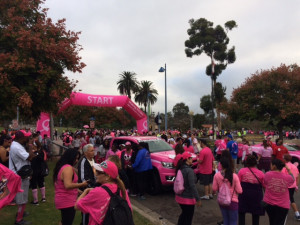 Last Sunday, October 16th, EC San Diego participated in the annual cancer event, Making Strides Against Breast Cancer, organized by the American Cancer Society. EC San Diego staff met at Balboa Park bright and early at 7 a.m. with their supportive pink t-shirts to match. The enthusiasm and strong spirits primed the crowd for an inspiring and fun day for all in attendance! Every year EC San Diego staff participates in this event to support cancer survivors from EC and around the world. There were over 20,000 walkers that came out and helped raise over $750,000.00 for this fundraising event. It was a fun and incredible event for EC San Diego Staff to be a part of. You can donate to The American Cancer Society directly on their site: http://www.cancer.org/.

EC Teacher Kevin shares his Making Strides for Cancer experience with us:

As we were approaching Balboa Park, the darkness was feeding and the light was coming out. Between the streets and coming out of cars you see flurries of people wearing pink, all heading in the same direction. We joined the hundreds of people that were already there, soon to be flooded with a couple of thousand people, all coming out for the same cause and to unite with their brothers and sisters in unison to against this murderer called cancer. It was astonishing to see so many people who have been directly affected by cancer. Survivors and supporters joined together with love and smiles, heading off on the 5 km track that went around Balboa Park and up the 163 freeway and down the main street of Hillcrest. The streets were so packed with people that it made it impossible for anyone who tried to run the 5 km. EC San Diego has been personally affected by cancer, and we currently have a handful of people who have survived its attack. I walked for them, and I also walked for my mom who unfortunately didn’t survive. Events like these not only raise awareness about Cancer,  nor only raise money to defeat it, but it also shows the commitment, determination, and resilience people have who act together, whether it’s around Balboa park with thousands of survivors and supporters, or just walking around your own block alone with a pink shirt. The people, united, will never be defeated.