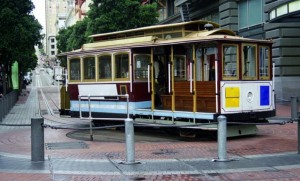 Since August 2, 1873, the city of San Francisco has celebrated it’s favorite method of transportation… the infamous cable car.

Inventor Andrew Smith Hallidie decided that a cable driven, steam engine powered vehicle would be a useful alternative to using the traditional horse and cart. In the late 19th century, new technology was devloping and it was ovbious that steep slopes and rocky cobblestones were uncomfortable for city horses, who would struggle to keep a steady speed. Did you know that the first cable car was tested at 4am on Clay St. which runs horizontally across the middle of San Francisco? However, it was actually Andrew’s father who inspired such technical innovation. During the famous ‘gold rush’ from 1852 onwards, Andrew’s father (also named Andrew) had created a ‘cable-rope’ mechanism which allowed him to move bricks and coal. With the help of his father, Andrew was able to improve this original mechanism and by 1878, ‘California Street Cable Railroad’ was up and running.

This new system of transport was so popular that the city of San Francisco lay down approximately 53 miles of ‘cable car track’, which expanded from the Ferry Building all the way down to the Misson District. Several cross-routes were also established, which meant that attractions such as the Golden Gate Park were also accesible to both local resients and those visiting the city. Sadly, the great 1906 earthquake caused much damamge to San Francisco’s both the city’s famous landmarks as well as its transportation systems. However, by this time electric streetcars had been fully developed which had soon become the transportation system of choice amongst the San Franciscan population. Despite a decline in the new number of original cable car lines, this slightly older method of transportation was still effective for moving up steep, inconvenient hills and to this day, has remained an integral part of Bay Area culture.

So what are you waiting for?! For just $6 you can enjoy the bumpy delights of San Francisco’s hills and observe extraordinary views of the city. For more information about the Powell-Mason and Powell-Hyde routes visit these links below.

*Adapted and sourced from http://www.cablecarmuseum.org/heritage.html