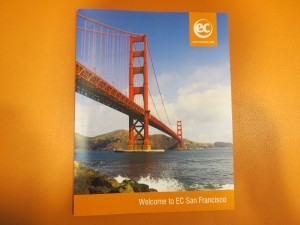 The Golden Gate Bridge is an iconic image of the San Francisco Bay Area and is often considered the region’s most famous landmark. Here are some fun facts we bet you didn’t know!

2. The bridge is capable of withstanding earthquakes of 8 points on the richter scale.

3. The bridge cost an approximate total of $27 million!

4. The west coast monument has featured in several Hollywood blockbusters, including Mega Shark and Giant Octopus, Vertigo, Hulk, X-Men: The Last Stand, Superman: The Movie and James Bond: A View to Kill .

6. Many people choose to cycle across the Golden Gate Bridge. However, walking is also a popular choice with pedestrians able to walk on the east side of the bridge.

7. The Golden Gate Bridge has a great working record and since the 1930s, has only been closed a few times as a result of poor weather conditions.