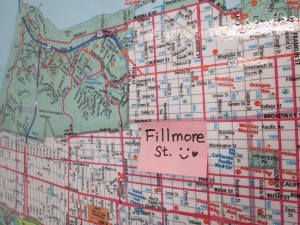 Fillmore Jazz Festival is the largest free Jazz festival on the West Coast, drawing over 90,000 visitors over the Independence Day weekend. From from morning to evening, visitors can groove to the sounds of live music from multiple stages, browse fine art and crafts through over 8 blocks and enjoy food and beverages. The festival takes place on July 7 & 8, from 10am to 6pm on Fillmore Street in San Francisco Between Jackson and Eddy Streets. All performances are free. If you would like to look into the event in detail, See web pages below.

The Fillmore was a national center for jazz during the 1940s and 1950s when it was known as the “Harlem of the West” and attracted many famous jazz musicians including Louis Armstrong, John Coltrane, Ella Fitzgerald, Billie Holiday and the “Bird”(Charlie Parker). In the 1990s, the San Francisco Redevelopment Agency created the Historic Fillmore Jazz Preservation District to encourage the development of entertainment and commercial businesses in this historical area. A Jazz Heritage Center was created within a major new apartment and commercial development, the Fillmore Heritage Center, which also houses the San Francisco branch of Yoshi’s jazz club.