Saturday September 7 was one of those absolutely perfect days in San Francisco, clear, no fog, quite warm and thankfully quite windy on the water, because it was the first 2 races of the 2013 America’s Cup.  After a long summer of preliminaries, there are 2 finalists.  The defending team are the American Team sponsored by Oracle, and the challenger is the New Zealand team sponsored by Emirates Air.

The races continue on San Francisco Bay until there is a winner…New Zealand needs to win 9 out of 17 and the US has a more difficult job, they must win 11 out of a possible 19 races.

The America’s cup is the OLDEST trophy sport in the world, pre-dating the modern Olympics.  The first race was in 1851!  The yacht, named “America” represented the newly formed New York Yacht Club and beat the British Royal Yacht. 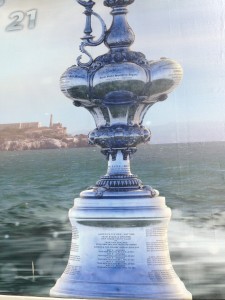