By Student Ambassador Bastien B. 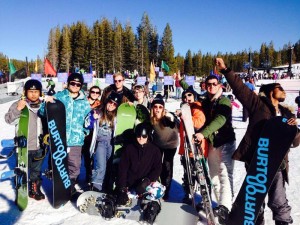 The last time I wrote a blog was about my trip with fifteen friends in the Yosemite Park. Today, I am back with a new story in a new place: Lake Tahoe.

The largest freshwater lake in the Sierra Nevadas of the United States, it is located along the border between California and Nevada. 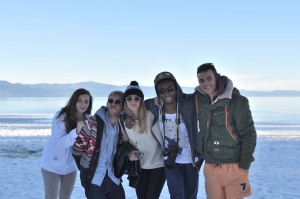 Ski resorts, frozen beaches, wonderful bays, clear water, I can tell you many reasons to go there. Again, it was a cosmopolitan weekend: fifteen people, five different nationalities, three cars and one crazy American house. We were in Tahoe City, on the Northwest of the lake. From San Francisco, it took nearly three hours and twenty minutes to drive there.

I’m going to explain to you how we had planned our weekend. On Friday after school, we left directly from the city. At this time of the year (17th of January) the darkness came early, so we arrived at our final destination during the night. We took a rest and mainly enjoyed the Jacuzzi on the roof. Warm water at two in the morning, an almost full moon and somewhere in the forest, it was almost idyllic. 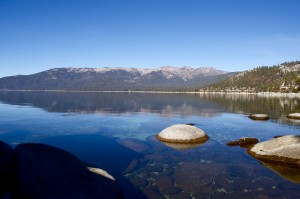 On Sunday, our plan was to ski and see this thing white and which could eat, the snow. Effectively, we were with some people who had never seen it. Try to imagine the stars in their eyes when they saw it for the first time.

From the beginners to the almost professional skiers, everyone fell down at least one time. And of course, I was here with my GoPro (camera) to record all of that. The weather was perfect, wonderful blue skies and it wasn’t cold. So we could have skied or snowboarded, for the most courageous of us, without gloves or caps. We left the ski resort when the night began to appear. We were really tired so our last night was not very long. Quick to the beds, snoring was a competition of sport! 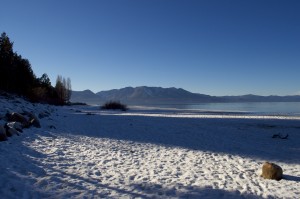 On Sunday we toured around the lake to see the beautiful scenery. The water was really cold so nobody tried to swim, not even a little bit. It was relaxing, and certainly would make a great spot for a barbecue there during the summer. We walked also on frozen water, looking for which one of us would stumble in first.

In summary, I will finish this article with the price of the weekend: cars, gasoline, house, daily pass for the ski resort, food etc. We paid nearly $240 per person, it wasn’t too expensive and souvenirs and memories with your friends didn’t have a price.