September was Wellness Month at EC Schools, and so  teachers, staff members, and students from the EC language schools around the world participated in the Taking Steps Towards Wellness Step Challenge to promote good health and the benefits of exercise.

EC San Francisco had five teams of four people each who participated, and each week one person from each team wore a pedometer to measure how many steps they took throughout the week. The Peanut Butter Jelly Belly Team (named after the famous YouTube video), which included Heather (teacher), Florent (Residence Coordinator), and students Boon and Ark was the team with the most steps, with over 360,000 steps total. EC SF student Maria Victoria of the Earthquakes team was the individual with the most steps, with a total of 115,669 steps taken during the week! At the end of the contest, all participants received $5 coffee gift cards for a job well done. 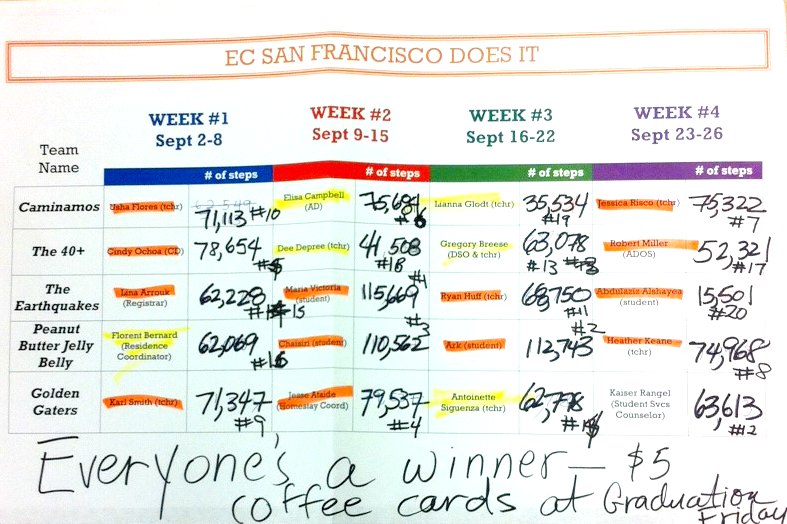 As well as the friendly competition at school, there was also a contest between all of the EC schools in three categories. A team from EC Vancouver won for the highest group total, Victoria from EC Central was the individual with the most steps taken, and our own Team Peanut Butter Jelly Belly won the most fun category, for the best and most creative photo, for the photo seen above. Here was the “official” announcement:

The Taking Steps Challenge is just one of many interesting and enjoyable activities that can be experienced at EC language schools. Studying English shouldn’t just be educational, but a lot of fun!