Had a great time watching the NBA Western Conference Semifinals with students yesterday, 5/28/15.  We met at the Royal Exchange, a great bar in the Financial District of downtown San Francisco.  The hometown Golden State Warriors won the game on TV and advanced to the NBA Finals which start next Thursday, 6/4/15.

It’s the first time in 40 years our basketball team has reached the Finals, and everyone at the bar and in the bay area was very excited.  Hopefully, the Warriors can bring home a championship!  EC SF staff and students will be watching with the rest of the locals–Go Warriors!!!  And if you’re near the Royal Exchange, try the Royal Punch, their signature cocktail featuring three different rums.  Delicious! Have fun outside of school and study ESL in San Francisco. 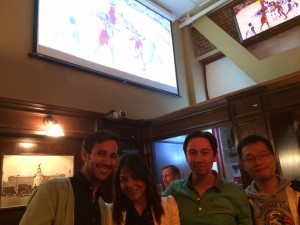