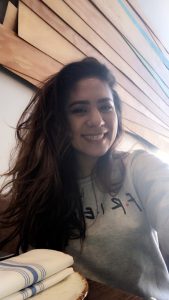 1. Introduce yourself in a few words.

I am Linah Sofi, a Saudi Arabian living in the United States. In 2011, I was granted a full scholarship from the government of Saudi Arabia to pursue my Masters in Teaching English as a Second Language. I graduated from the University of San Francisco in 2015. I have 4 years of teaching experience including kids.

2. What do you like most about being a teacher at EC?

Aside from meeting awesome people from all around the world, and listening to their awesome stories about cultural differences? I like the Teachers Room the best! It feels like a community of help support and jokes! It’s very relaxed.

3. What’s your favorite skill to teach?

This might surprise some people, but GRAMMAR! When I was a student I hated it, but as a teacher, and after I learned it extensively in USF, it all made sense! I do compare it to logic and math, 1+1=2.

4. What’s the hardest part about being a teacher?

Trying to mask the frustration I feel with myself, when I fail to make a  point clear. Students may feel that I am frustrated with them, but I always try to explain to them that it’s not about them. It’s about me. Feeling that I am not good at my job makes me so upset.

Most students are excellent success stories. Many also stand out. But I remember a man from Paraguay named Luis Florentin. He came to class with very limited English, and was very shy. He sought the help of others to translate but after a couple of months, he became the one so comfortable with language that was now acting like a translator to others and helping them. Stories like that often happen, seeing a shy hesitant student who’s looking for a crutch, becoming the help everyone else seeks. Now Luis can carry on full complicated conversations in various controversial topics.

6. What’s a word / phrase that you repeat so much in your classroom?