Across the San Francisco-Oakland Bay Bridge, there’s a whole world that could be discovered. Usually, people who visit us here in San Francisco are reluctant to visit Oakland. Only because the bridge that connects the East Bay to San Francisco isn’t Golden! Well, it might not be as flashy as the Golden Gate Bridge, but it’s as reliable and as pretty! And Oakland is a huge area that has a lot of cool and hip spots. Here are five great places you need to visit while you’re here. 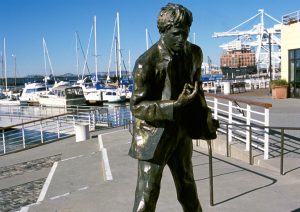 It’s the center of so many businesses and restaurants overlooking the Oakland-Port. The Area was named after the novelist, essayist, and journalist Jack London. He was a famous American writer born and raised in San Francisco, CA. There’s a huge bowling alley / arcade bar and restaurant. There’s also a hotel overlooking the Bay that is Navy themed. There’s a Waffle & Chicken cafe that is delicious and famous. 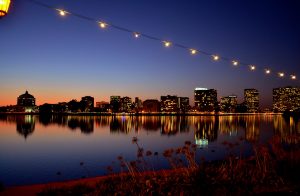 It’s a lagoon situated in the center of Oakland. The lake is surrounded by the many districts. It is the place of many restaurants and bars. The lake is a national historic landmark since 1963. It was the country’s first official wildlife refuge in 1860. 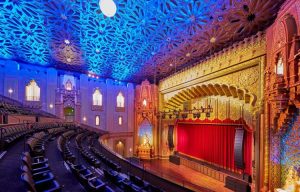 The theater is also listed a national historic landmark. It was opened in 1928. It was first a movie theater, then turned into a music venue. It is unique in its interior design as much as its architecture. The venue hosted so many famous artists including B.B King, Metallica, Bob Dylan,  Van Morrison, Lorde, Animal Collective, Green Day and so many more. If you’re ever interested in attending a concert, check this one out! 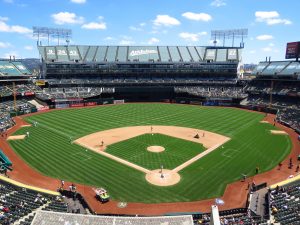 It was build in 1966 as a home for the Oakland Athletics (MLB) and the Raiders (NFL). It is the only remaining stadium that holds matches for both baseball and football. It was also once the home stadium for San Jose’s Earthquakers (Soccer). It contrast the ballpark in San Francisco in atmosphere. While SF’s Giants is very diverse and commercial, the A’s stadium offers the real American experience of Baseball. You should try to attend a baseball game once the season starts again!