It has become a habit that we receive a closed group of young learners in January. The agency, ACP, promotes for two weeks of English learning to young South Koreans. They come from different cities in Korea. They are 10 to 15 year old boys and girls. Two adult leaders accompany them, and are responsible for their well-being and fun after school activities.  We were responsible for providing their lunch everyday.

They spend their winter vacation between learning English, experiencing the American classroom, and enjoy their time in the San Francisco. This year we had 19 students who arrived on the 10th. We tested them, placed them all in our biggest classroom. Teacher Linah was assigned to teach them for two weeks. She was responsible on scaffolding what they have already acquired in Korea. They learned about Media on week one, then learned about Arts on week two. They also painted and drew a lot of pictures expressing their feelings and experiences. The most part they enjoyed was telling stories using Rory’s Cubes. On their last day, they watched the Netflix movie Klaus as a whole class.

The South Korean kids enjoyed their afternoon schedule too. They went out and explored the Bay Area everyday. They visited Pier 39 and enjoyed the Sea Lions. They went to Fishermen Wharf with Teacher Sophie. Teacher Phan took them to the Coit Tower. They toured around North Beach with Teacher Chloe. They visited the Mission and the Golden Gate Park. A Korean graduate student from UC Berkeley gave them a tour and introduced them to the University’s historical significance. Then, they went to Sausalito and spent the day enjoying ice cream with Teacher Linah. They visited the Museum of Ice Cream, too!

They finally graduated after two weeks, and preferred Super Duper burgers over In-and-Out’s! Can you believe that? 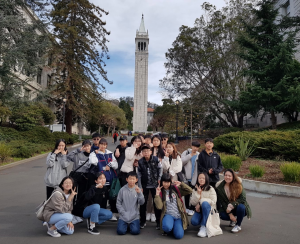