You all must have seen many people around Toronto wearing poppies on their coats these past few weeks. Poppies? Yes, those red flowers with the black centres.

The remembrance poppy has been used by groups of military veterans since 1920 to recall the soldiers who died in World War 1.

Today, especially in the UK and Canada, small artificial poppies are put on people’s clothes on Remembrance Day / Armistice Day (November 11) and in the weeks before to commemorate their servicemen and women who have been killed since 1914.

Remembrance Day is a public holiday observed in all Commonwealth countries to remember the members of their armed forces who have died in the line of duty and those who continue to serve their country during times of war, conflict and peace.

The City of Toronto is hosting ceremonies marking Remembrance Day at the Old City Hall and in each of the Civic Centres across Toronto: East York, Etobicoke, North York, Scarborough and York. Services will also be held at Fort York and Queens Park. Each of these will start at 11 AM.

If you want to know more about it, you can visit the virtual exhibition of the Canadian War Museum. There, you will see pictures of Canadian troops in the trenches, artwork and recruiting posters, as well as maps and original letters from soldiers. (http://bit.ly/17c0tWF)

EC Toronto’s staff and students are participating in this special occasion of Remembrance Day by buying and wearing poppies as a sign of respect, commemoration and support of Canada’s war veterans. 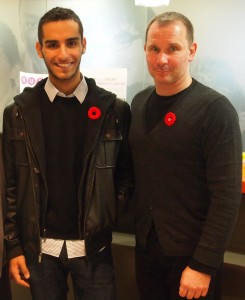 If you still don’t have one, you can easily get it at Eglinton subway station, many shops or in all Metro stores!

And don’t forget, EC Toronto is closed on Monday November 11!