If you follow baseball, you’ll know that the Toronto Blue Jays are on fire this season!  Torontonians are certainly very proud of our beloved Blue Jays.  You might notice people walking around with hats and jerseys to show their support of the team.  Here at EC Toronto, you might notice your teachers, staff, and fellow students showing their support for the Jays.  In honor of the Jays’ victory streak, we’ve included some trivia questions to see how much you know about baseball.  See how many of the questions below you can answer. 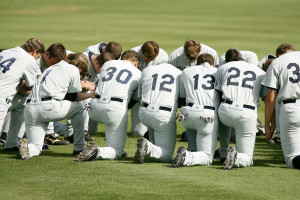 1. What is the oldest stadium in MLB?

2. Who was the first President of the United States to watch a Major League baseball game from the dugout?

5. The legendary Babe Ruth played for which of the following teams:

d. All of the above

6. Whose number was the first even retired by an MLB team?

7. Which team has the most overall losses in MLB history?

8. Name the only player to hit a major league home run and score an NFL touchdown in the same week.