Taste of The Danforth Festival is back! They will celebrate the 24th anniversary of Canada’s largest street Festival (approximately 1.65 million attendees) as well as Canada & Ontario’s 150th birthday on Friday August 11th, Saturday August 12th, and Sunday August 13th.

Attractions include a Greek Stage, Celebrity Stage, and Showcase Stage programmed by NXNE, as well as a kids’ zone, sports zone, and of course, a multitude of drool inducing food options.

To eat this year, attendees can look forward to restaurateurs along The Danforth offering “Tasting Menus” priced at $6 or less.

To top it off, the Festival is all about the spirit of giving back – Constantine Voidonicolas, Chair of the Greektown Danforth BIA, confirmed that once again all proceeds from the Festival go to supporting a number of charities.

When: August 11 to 13
Where: The Danforth, Toronto
Price: Admission is free 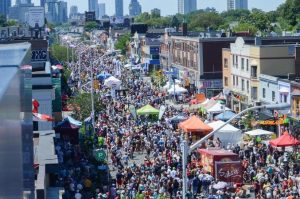