Positioned on an outcrop at Humber Bay Park, the Toronto driftwood sign is aptly placed on Lake Ontario to feature Toronto’s skyline in the background.

Julie Ryan (Designer) and Thelia Sanders-Shelton (artist) worked in secret for seven days to put together the nameplate. It was the first time either of them had worked with driftwood. 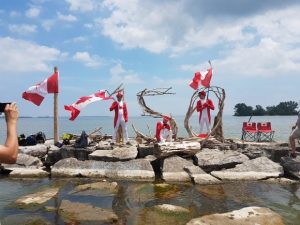 “The biggest challenge is getting the pieces to fit together,” Ryan told CTV Toronto.

An earthy, wooden Toronto sign now stands on a rocky quay along the water, a vibrant juxtaposition to the concrete and steel backdrop of the Toronto skyline.

It’s made of driftwood that washed up on a nearby beach. The pair got the idea when they heard that Toronto and Region Conservation Authority was looking for “driftwood artists” to make a sign for Canada 150.

But that sign only lasted about a week. “They are driftwood and they’re drywall-nailed,” said Sanders-Shelton, “so they only have so much life.” 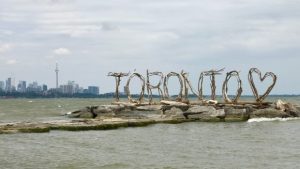 Other two famous signs in Toronto are:

And the most famous is the 3D TORONTO Sign was Originally installed for the 2015 Pan American Games as a temporary attraction meant to be dismantled in November 2016. Due to popular demand, the illuminated Sign still remains on the square. Explaining the city’s decision to keep it, Toronto City Councillor Norm Kelly said the sign is as iconic as the CN Tower and that it has become known all over the world. It has appeared in an estimated 120 million pictures in various social media outlets. 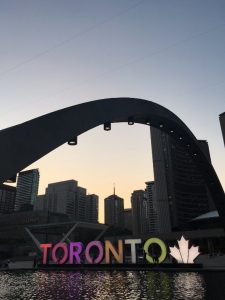 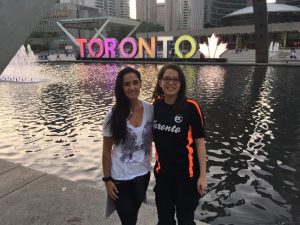