Toronto has a big television and film production industry this is the reason that the city is called Hollywood North. Toronto is normally used to replace cities and areas including Chicago and New York.

Some places around the city are popular for making famous movies and you have a chance to visit while you are studying English in Toronto. You can check them bellow: 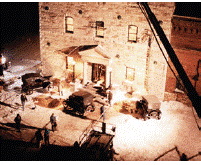 You can also check all the movies that has been recorded in Toronto at this link.

If you want to know what has been shooting while you are studying English in Toronto, check out this other link and stay alert. It is your chance to meet some famous actors.

Check our English courses in Toronto and set a date according to your favourite movie! See you soon!