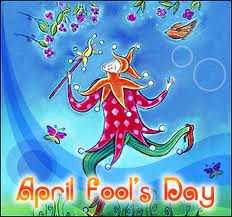 Next Sunday  is April Fool’s Day, traditionally known as All Fools’ Day.  It is one of the most light-hearted days of the year.

On April 1st, people play funny jokes and tricks on their family and friends.

The origin of April Fool’s Day is unknown. The most popular idea is that April Fool’s Day came from the changes to the Gregorian calendar in the 16th century. Before this time, the New Year was celebrated at the end of March, with parties ending on April 1st.  After the calendar changed, the New Year began on January 1st as it does now.  Back then, communication wasn’t as good as it is now.  Many people simply didn’t get the message – or if they did, refused to accept it.  They continued to celebrate the “old” new year, and they became known as “April Fools”.  Another theory is connected to the French term for April Fool: Poisson d’Avril which means “April Fish”.  During the spring – and especially during early April – many young fish would hatch in the French streams. These young fish were easy to catch with the simplest equipment and therefore became know as foolish April fish. The term later became used for any foolish person and led eventually to the playing of April Fool’s Day jokes.

Traditionally, in countries such as Canada, New Zealand, the UK, Australia, Cyprus, and South Africa, the jokes only last until noon.  Someone who plays a trick after noon is called an “April Fool”, so if you want to be called an April Fool, feel free to make jokes and play tricks all day!