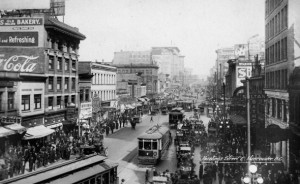 Jitneys started appearing on the streets of Vancouver and other cities during World War I. They were cars that operated like buses, with fixed (yet flexible) routes, multiple passengers, and a flat fare of five cents . Not surprisingly, the monopolistic BC Electric Railway Co. (forerunner to TransLink and BC Hydro) was none too happy with the phenomenon because it forced them to compete with low fares and convenient service, not to mention a reduced ridership.

Initially BCER made the case that jitneys were not  economically sustainable once maintenance, depreciation, and liability costs were accounted for. To test this theory, they secretly operated three jitneys in the winter of 1914-15, but found that a jitney operator could eke out a living comparable to a factory worker. Still, the profitability of jitneys was whittled away by taxes, licencing and other fees gradually imposed by the City, and were ultimately banned altogether.

Jitneys played a role in industrial relations. The head of BCER blamed a 1917 street car worker’s strike squarely on competition from jitneys, which, he said, destabilized the streetcar industry and made it impossible to meet wage demands. During the 1919 general strike, jitneys were used  to mitigate the impact of striking streetcar workers and thus undermined the strike. In 1933, Mayor Taylor averted yet another strike by threatening the head of BCER that the ban on jitneys would be lifted unless they got back to the bargaining table and started making some concessions to the union.

Although they looked like taxis, jitneys were in fact the forerunner to the city bus. The BCER eventually incorporated modern streetcar-style buses into their system and phased out streetcars altogether in the 1950s.