Last Monday the hockey season started in Vancouver. Some of EC Vancouvers students and staff went to see the game. Let’s read about their experience.

Inna Lin (intern): “The season has started and everyone is going crazy in Vancouver. You can see a lot of people in blue tights. But why everyone is so exited? Is an ice hockey game so special? The answer is yes!!! You can’t compare the atmosphere with anything else. Everyone in the stadium is so excited, they are screaming and cheering for their team – the Vancouver Canucks. They’re singing and they are so happy if the Canucks score a goal. Also there are mascots who animate the crowd. Furthermore there is a cam which shows fans on a big screen and their faces are so funny when they recognize that they’re being filmed. In the stadium you won’t die of hunger because they sell a lot of drinks and food. For example there are nachos, chips and salty popcorn. Because of the huge variety of offers, you are not allowed to bring your own food or drinks with you. All in all I can say that it was a great experience to see the game in the stadium and I recommend it to everyone. So get up, buy a ticket and enjoy your time at Rogers Arena in Vancouver!”

Alma Begovic (Acommodation Coordinator): “We entered the stadium through Gate 2 of Rogers Arena and made our way to our seats to settle in for the game. Despite it being a pre-season game the stadium was filling up and the atmosphere during the National Anthem before the opening face-off was electric. It was a perfect lead up to a hotly contested game that often boiled over into some fighting which at the professional level in North America is unofficially condoned. The referees will allow the fight to continue for some time, normally until one or both players leave their feet; one of the many exciting parts of the game! Although the Vancouver Canucks lost the game, some of the play and goals were amazing. In between periods the music would be turned up and the stadium cameras would find people in the crowd which was fantastic fun, you never know if your face will be on the big screen next! The passion of the fans was apparent and it’s something everyone should experience when they come to Canada, you won’t leave disappointed. Ice Hockey is simply huge here. Final Score was Vancouver Canucks 2, San Jose Sharks 3.” 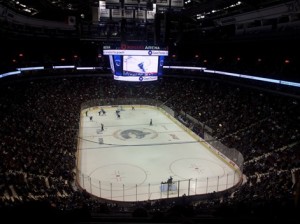