Yesterday our students at EC Vancouver carved pumpkins, a common tradition in Canada, but how much do we really know the history of pumpkin carving?
The Irish mythos of pumpkin carving is about a man named ‘Stingy Jack’. Jack was famous for playing tricks on everyone. The story has it that when Jack died, he was refused entry to heaven and hell. The devil decided he would have nothing to do with him after all the tricks he played. Jack was forced to roam the world as a ghostly figure, holding a lantern made out of a carved turnip with a burning coal and so, the tradition of the jack o’ lantern was born.
As you can see the tradition of carving pumpkins did not originate with the pumpkin. The first vegetables that have been carved were turnips, beets, and potatoes. When the pumpkin was discovered, people quickly found pumpkins better suited for carving.
Today, pumpkin carving is a big part of the Halloween tradition in North America, Ireland, England and some places in Europe. 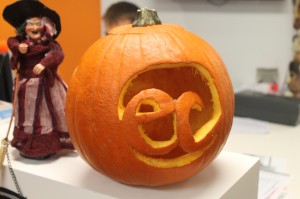