Seattle is a seaport city in the state of Washington, U.S. Due to its size and history the city offers a lot of restaurant, stores and attractions. Seattle is the 8th largest port in the United States.

How to get to there:
It is really east to get to Seattle from Vancouver. On a bus Seattle is only 4-5 hours from downtown Vancouver. But remember, you need to cross the U.S. border; so make sure that you have your passport and a valid visa if necessary.

What to do there:
The best known attraction in Seattle is probably the Space Needle. You can enjoy the beautiful view at a height of 184 meters. Another attraction is the first Starbucks ever, located in Pike Place Market. It opened in 1971 and is still running today. Close to the Starbucks is the famous Gum Wall, which became a real landmark for Seattle. The tradition to stick gums on the wall began 1993. The workers scraped away the bubble gums but after several tries they gave up. In 1999 the Gum Wall started to be a tourist attraction. Seattle is also famous for its music scene, notably for Jimi Hendrix and Nirvana.
If you are interested in music you can visit the Experience Music Project Museum. It’s located next to the Space Needle. Seattle is a quick getaway that offers EC Vancouver students a lot of opportunities to learn, engage, and explore a different city. 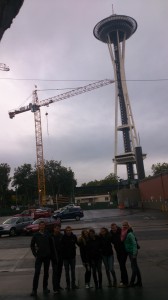