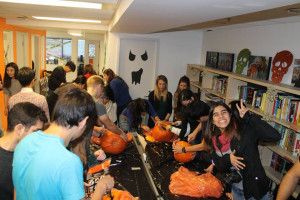 This week is Halloween week at EC Vancouver. On Wednesday, we celebrated with one of Halloweens’ most popular traditions, pumpkin carving!
Carved pumpkins, more commonly known as Jack-o-lanterns, are one of the most common Halloween decorations. They are made by emptying large pumpkins, carving scary faces into them, and leaving them on display for people to enjoy. Sometimes, to make them extra creepy, people will put a candle into a jack-o-lantern so that it glows from the inside. Another great thing about carving pumpkins into jack-o-lanterns is that once you are done, you can do whatever you want with the insides of the pumpkin. Many people use the contents to make pumpkin pie, or other delicious pumpkin recipes.
Here at EC, we had an exciting pumpkin-carving contest in which 30 teams participated. There were some very artistic and creative designs. Most importantly, everybody had a lot of fun, and got to enjoy an activity that they had never done before. At the end of the week, after students vote their favorite pumpkin, the winning team will receive a massive bowl of candy. Good luck everyone!
======
Do you want to learn English in Canada? EC offers English courses in Vancouver!