The Orpheum is a theatre and music venue in Vancouver, British Columbia, it is part of the Vancouver Civic Theatres group of live performance venues. It is the permanent home of the Vancouver Symphony Orchestra. The Orpheum is located on Granville Street near Smithe Street in Vancouver’s downtown core. It opened as a vaudeville house on 7 November 1927 (its first concert took place the following day), and went on to host performances by Charlie Chaplin, the Marx Brothers, Rudy Vallee and other performers affiliated with the Orpheum Circuit. 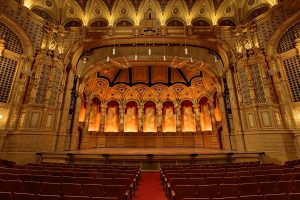 The Orpheum displays much of its original splendour since 1927 despite some loss of detail and some updating for acoustics and patron comfort. Its style is an exuberant and eclectic mix of Romanesque, Moorish, Gothic and Spanish Renaissance elements, making it Canada’s best example of the exotic phase of cinema architecture which was the fashion in the larger North American cinemas in the late 1920s. Disparate elements are linked through the effective use of repetition. The overlapping arches that encircle the ceiling, for instance, visually link the oval dome to the curves of the organ screens on either side of the elliptical proscenium arch. The theatre was designated a National Historic Site of Canada in 1979. 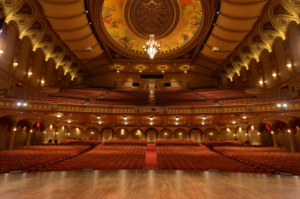 —–
Planning to come to Canada to improve your English skills? Find out more about English Courses in Vancouver!