We were delighted to include Sooseong Yang (Henry) as one of our students for over 6 months. Visiting us from South Korea, his mission to learn English in the USA took him to EC LA and EC San Francisco before he landed here in DC. I think it’s fair to say he loved his time here at EC Washington the most, but let him tell you all about what he has learned during his travels with his own special blog post: 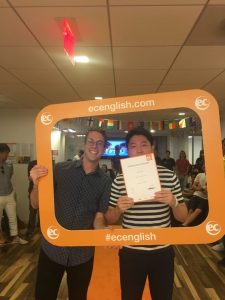 1. Koreans are the only human being who have bangs but don’t have bear or mustache.
2. The cost of living in the U.S. is almost twice as much as that of Korea; mainly because of the housing and food which are the two main parts of our living.
3. Age is nothing but a mere number. Not until did I come to the U.S. that I realize people who are 20s and 50s can become friends. Probably, I have missed so many valuable friends in my life just because I am older or younger than them. I will not confine myself to age from now on.
4. Google, Amazon, Apple rules the world. Now, I reach to the point where I can’t imagine my life without them.
5. NBA is way better than MLB. Let’s go Warriors!
6. The Weather of the U.S is insane(in a good way of course). I don’t want to suffer from fine dust. Fine dust isn’t fine at all.
7. Of all the places I’ve had the opportunity to visit in the U.S, the Grand Canyon along with Horseshoe band and Antelope Canyon was the best. You can really understand the meaning of ‘Overwhelmed by nature’. You can be humble as well; realizing how a human being is small in front of the gigantic nature.
8. The Declaration of Independence is worth reading three times. Especially this part: We hold these truths to be self-evident, that all men are created equal, that they are endowed by their Creator with certain inalienable rights, that among these are life, liberty and the pursuit of happiness.
9. As far as the quality of the photo is concerned, the iPhone is the best.
10. New York is worth visiting just because of the lobster in Chelsea Market. The most delicious lobster in the entire galaxy!

Insights of English learning
1. Collocation is super important.
When we refer a person who smokes a lot, we call them a heavy smoker.
Not an over-smoker or super smoker. It is a heavy smoker. Why? There is no specific reason. It just does. That is what we call collocation. There are lots of collocation in English.
e.g. crystal clear, pitch-black, stone-cold, etc.
I guess we use many Korean(ish) expressions because we are not familiar with these collocations and try to translate directly from Korean. If you want to avoid Korean(ish) expressions, I recommend this site: Ozdic.com. This is a very useful website for collocation.

2. They really like to emphasize something in a negative sentence e.g. There are few things in my life that give me more joy than eating lobsters I cannot recommend this highly enough

3. ‘FRIENDS’ is THE TV show in terms of learning English and American culture.

4. The article is the trickiest part in English.
Mistakes from Subject-Verb agreement, tense, singular/plural, active/passive, prepositions could be prevented if I spent enough time to take care of it. But no matter how hard I try, I cannot avoid mistakes from the article. I guess we don’t have a concept of the article in Korean. We poor Koreans couldn’t help but memorize all the rules and exception of article. If you don’t want to memorize all kinds of stuff just bear in mind: a/an is for general topic and the is for the specific topic. But this is just a rule of thumb so you cannot cover all the articles based on this.

5. (Most important) English is not a thing to master
When I first came to the U.S my biggest mistake was I studied English as I studied Math. I tried to study all the grammar and vocabulary I didn’t know. And whenever I found information that is incompatible with my knowledge, I just spent my whole time to study it. This kind of approach may effective if you take a test or something. From the long term perspective, however, it easily makes you exhausted. So unless you are on the verge of taking a test, just change your mindset. Do not try to learn English just immerse yourself and enjoy them as a language itself. English is not a thing to master but just a mere language for communication.