St George’s day is celebrated on the 23 April.St George’s Day is celebrated by several nations, kingdoms, countries, and cities, of which Saint George is the patron saint, including England, the old kingdoms and counties of the Crown of Aragon in Spain – Aragon, Catalonia and Valencia; Portugal, Georgia, Serbia, Bulgaria, Bosnia and Herzegovina, the Republic of Macedonia, and the cities of Moscow in Russia, Genova in Italy, Ljubljana in Slovenia, Beirut in Lebanon, and many others. Although this is not a bank holiday in England it is still a very special day for all who live here.
Paintings and pictures of St George normally show the brave warrior slaying a dragon
For those wondering where the Dragon “fits in” with this story, as legend would uphold: St. George, on a particular day, came to a city known as Selem, where nearby lived a dragon in a swamp. As part of the dragons’ daily dietary requirements, he required to be fed one of the City’s citizens, the poor unfortunate drawn by lot. The day St .George arrived, the lot had fallen upon the King’s Daughter- -Leolinda. In a “magnanimous” gesture of bravery and chivalry, St. George resolved that the Princess should not die. Hence he mounted his trusty steed, attacked and slew the dragon.

In celebration of St George’s day we ask all our EC language students to dress up in red and white on the 23 April .EC Cambridge will host a  fun quiz night in the library starting at  6:00 pm.All EC students are invited to participate.Fantastic prizes up for grabs!!See you there. 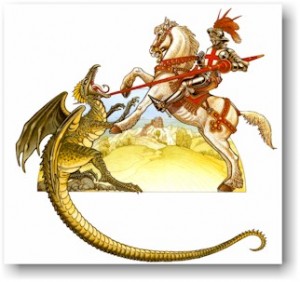