Furkan Bedir won the prize for the best lecture essay on the “Art of Poi- Fire dancing”. Well done Furkan! 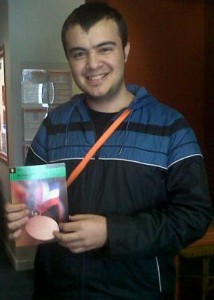 And here is the winning essay:

The Art of Poi
Poi is refers to both a performance art and the tools used for it. The tools swung are also called poi, and have many forms.

There are several basic classes of trick. The poi are usually spun in parallel planes and you can be same direction waves, or opposite direction butterfly. You can change one direction to change between these two classes. For example to art of poi: Weaves, Butterfly, Wraps, Flowers…
In the Maori language poi can mean the physical object, the choreography or the accompanying music. In Mairo culture poi performance is usually practiced by women.
Modern Poi has borrowed significantly from other physical arts, including different schools of dance and many object manipulation arts. It is practiced around the world and can often be seen at large festivals like “Burning Man”, “ European Juggling Convention” and the “ Fine dance Expo held annually during National Dance Week” in San Francisco.