Today marks the end of one of our student’s course at EC Cape Town. At the same time, it also marks a new beginning!

Academic Year student, Mohamed Ali Alkateia of Libya received his certificate today and over the course of six months, made an impressive improvement of over 40% in all his skills. We are exceptionally proud of him! When he arrived at EC, we already knew that he was an ambitious young man with big dreams. He spoke passionately about aviation and was determined to do whatever it takes to gain entrance into aviation school. This meant working very hard and doing extra work to raise his English level. He recently gave a lecture to students about aviation and he was extremely fortunate to have been afforded the opportunity to visit Cape Town International Airport’s Air Traffic Control Tower.

This is what he had to say about it:

“In my adventure of becoming a pilot, I had to start exploring the whole communication behind flight to truly understand the operation. On the 2nd of September, I visited the Cape Town International Airport (control tower), it was one of my dreams there is is becoming a true. I have realized that communication is a vital component to the aviation.
In South Africa there is average of 600 flight routes daily which are controlled with communication so that no aeroplanes cross each other’s routes.  This also includes security of where the planes are, and all this happening in the grand controller. By the way, you have realized that the control tower is one of the important section in the aviation.
It seems the traffic light controlling routes for the cars weather will be in a big mass.  After all,  I’m really happy to had the opportunity from one of my best teacher (Sheetal)to visit the control tower and achieve particular information, to be more known about aviation and a part of my future job.” 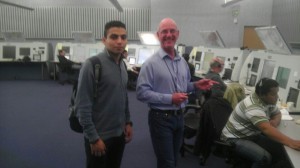 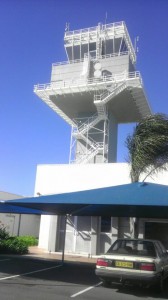