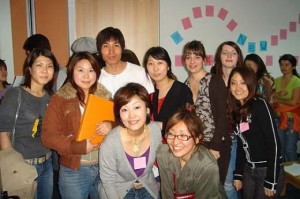 At EC Malta English school, Haruka, our Asian Welfare Officer along with EC’s Korean students organised an afternoon of events to celebrate the new year. Our Korean students in Malta really helped make it a day to remember!

At 15:30 students congregated in the Student Lounge to celebrate the Korean New Year along with their colleagues and learn about their traditions. Everyone had the chance to taste traditional Korean foods of Wanja (a meat and onion dish), Kimchi (pickles, which Koreans eat with most meals) and Kaktugi (another type of pickle).

As everyone walked into the lounge they were given a name tag with their names written in Korean orthography as a souvenir, and a print out with the numbers and Happy New Year written in Korean so that everyone would be able to greet each other in the traditional manner. The countdown took place just before 16:00 with everyone participating and champagne being popped! The following hour was filled with a presentation on Korean culture by Jin Sarang and Byon Sujong, who explained to us that Korea is divided into North and South Korea and is an independent country with 5000 years of history. At this time of the year Koreans travel to their home town to spend time with their families. Youngsters pay respect to their elders by bowing and they are then rewarded with a cash gift.

Two students gave a demonstration of the proper way to bow… however they didn’t get their cash reward! A typical dish is dduck-kuk (rice cake soup) which is eaten to represent eating away another year. They also play the traditional games of yut (board game) and kicking the shuttlecock, and enjoy kite flying. The students had a make shift version of the yut game and the shuttlecock for others to try. Haruka and Kim gave Korean calligraphy lessons where people could try painting in Korean calligraphy.

Everyone who was present had a wonderful time and a huge well done goes out to Haruka and all the students who organised the afternoon.