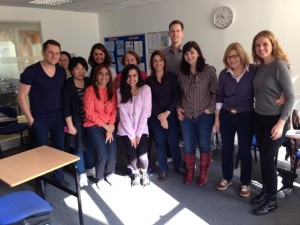 This week one of our teachers taught our  Grammar In Contexts 1 class how to use different future tenses.

The lesson started with every students being given a new celebrity identity… Here are some examples – Angelina Jolie, Jamie Oliver, Barack Obama and Richard Branson!

The students had to keep their new identities secret and then discuss the following questions with their partner:

Their partner had to listen to what they said and guess their secret identity!

The teacher told the class about a phone call she had received, her friend had invited her to a party! The first time they listened they had to decide of it would be a good party or not!
The students listened again and then they were asked to write down 4 different grammatical structures that the teacher’s friend used in the message to talk about the future. Here they are –

The class then analysed the language, they looked at the differences in meaning and discussed when to use each one. Then the class looked at how to say them. They listened to sentences from the voicemail and found contractions like ‘she’s’ in ‘ she is definitely going to come’ and the weak pronunciation of ‘going to’ which is said /gənə/.

The class then practised saying the sentences, repeating after the teacher to sound more natural.

Next lesson the students will be doing more practice with the grammar to plan an event for EC students to go to!

If you are interested in practising your grammar skills, why not visit our website for more information EC London 30+ and see which English courses suit you best.