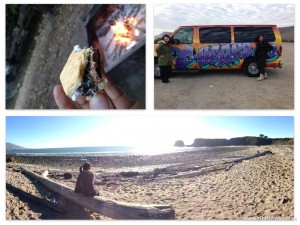 Camping is one of the most popular forms of leisure and travel in the United States.  I’ve heard dozens of stories from friends about their camping experiences. It doesn’t even matter what time of the year it is! There are people who like to camp in the blistering cold snow, and others who like to embrace the hot dessert heat.  However, the most recognized form of camping would have to be in the woods, with big tall trees, lakes, mountains, hiking trails, and tents and sleeping bags.  Yet, I have lived in the United States for more than fourteen years and have never gone camping in my life.   I’ve always loved nature and would go hiking in Malibu whenever I had time.  But it wasn’t until now, that I’ve finally experienced my first American camping trip!

How could I go camping without having any camping experience? Without any camping supplies?  Luckily, Escape Campervan made it extremely convenient and easy to go camping! Escape Campervan is a company that rents out customized vans that includes a queen size bed, a fully stocked kitchen (sink, stove, dishes, utensils, and REFRIGERATOR!), and everything that a person who has never gone camping (a noob) would ever need!  The company came to promote their vans to students studying English at EC Los Angeles and I was blown away at the packages they offer.

An Escape Campervan representative named Phil offered a great deal for my friends and I for renting one of their vans. It was too good of an offer to pass up, so I made the decision to go camping for the first time ever! Phil suggested that my friends and I go to Big Sur and visit the Pfeiffer Beach! I Google’d it and it looked so amazing! Cool crisp skies, large blue waves, and tall strong trees steal the glory here. I decided to take his advice and go camping during the long Thanksgiving break!

Big Sur is about 300 miles from Los Angeles. My friends and I had to set out early in the morning in order to get there before sunset.  Considering that it was Thanksgiving, we thought everything was going to be closed. So I decided to call the Fernwood Campground to ask about their hours. Jackie, the nice lady on the other end of the phone, asked about my plan for the trip (i.e. how many days I was going to stay at Fernwood). I told her, 3 days, and they she just made the reservation for me over phone right then and there! It was super easy and cheap! The camp site costs only $55 per night and it came with on-site water and electrical box. There were also restrooms, showers, a grocery store, and a bar&grill that included WiFi!

We finally started traveling on Thursday, and we could not stop admiring the scenery as we were driving along the beautiful California coast. The ocean was vibrant against the orange and pink sunset. We made so many pit stops during the drive to the campsite that it took us nearly 10 hours to get there! Surely enough, we did not arrive until night time. The woods were dark, only lit by small campfires. The trees were swaying in the wind, and the scent of the woods filled out airs.  We finally checked in, purchased some wood from the registration office and made our way to our campsite.

Traditionally, people set up tents and use sleeping bags when they go camping. But with our campervan, all we had to do was park and rearrange the seating inside the van.   After that, we could just hang out and enjoy the night sky.  For our first night, we used the propane stove that was provided and made Japanese curry! The best part was making s’mores, a classic American dessert for camping!

The next morning, we wanted to relax and explore our camp site.  We arrived too late last night to see everything, so our excitement in the morning could not be contained. We went on a hike through the woods, we took hundreds of pictures, we kicked around stones and dirt, we tried to climb trees, and much more! There was just so much to do in the woods. We were separated from the tasks of our day to day life.  It was amazing.

The following day we woke up extra early to go visit the Pfeiffer beach to see the sunrise. Of course we missed our alarm and woke up too late. But it was fine because when we got to the beach, we all thought it looked a thousand times better than the pictures on Google! Although we could not walk the shore of the Pfeiffer beach, the view was so breathtaking! It was so pretty, I could not believe how real it was. 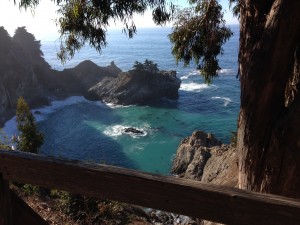 After visiting the Pfeiffer beach, we were all a little tired and hungry. We returned to the Fernwood Campground and decided to make some cauliflower stir fry and grill pork. It was delicious! 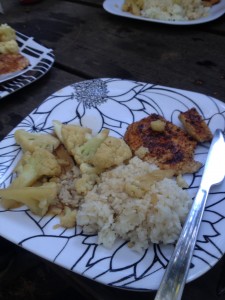 By the time we had cleaned up everything, it was only 12pm, so we decided to go on another adventure to the Andrew Molera State Park. The park was easy to find, but we had to pay for parking (boooo). There were two trails starting from the parking area: one is a beach trail and the other is the river trail. Both are only 1 mile hike.

We decided to walk the beach trail. The scenery of the beach trail looked like the background scene in the Sound of Music. Everything was incredibly green, the sky was bright blue, and the Sun’s ray gave us a warm escape from the freezing breeze. When we finally got to the beach, we sat down on a giant log. We took a ton of pictures (587 pictures from my iPhone alone) and decided to make silly music videos with the majestic backdrop of the beach. I won’t post the video on here because it is too embarrassing. 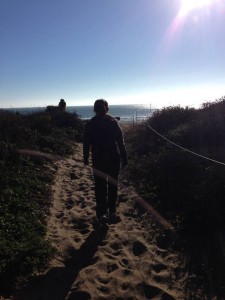 On our way back to the van, we decided to take the alternate route, the river trail. The trail shows where the Big Sur Rivers ends and where the ocean begins. The water was crystal clear. Too bad we couldn’t swim in the river. When we finished it was about 4pm, so we decided to head back to the campground. We picked up some more firewood from the check in booth, started our fire and began to make dinner.

Sadly, that was our last night. Even though we had to leave really early the next day, we all did not want to end our trip just yet. It was about 9:30pm, the check in booth was going to close, so I made the executive decision to buy another bag of wood! It was so strange when we lit up that last bag of wood. The flame was so bright and strong, it was literally the best fire we made all weekend! I can still feel the warmth and the smell of the burning wood. It was incredibly comforting.

And that’s my story about the best Thanksgiving I’ve ever had! Thank you to those of you that read it ’til the end! 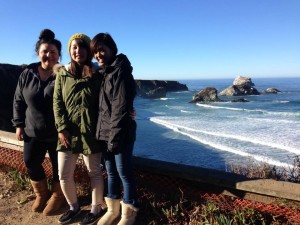