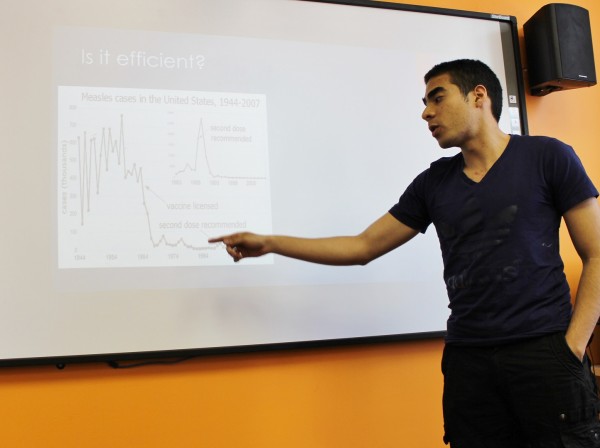 Eduardo is a young man from Colombia enroled in EC Montreal’s English Academic Year programme.  He has been studying English with us since February 28, 2015. Today, Eduardo presented as part of our Student Academic Lecture Series.  He chose to talk about the antivaccination movement.  He began by talking about the first vaccine that was invented to combat small pox.  It was actually made from cow blood and caused quite the contraversy back in the 15 century.

He then moved on to discuss the vaccine for the measles and his graph illustrated that with the introducion of the vaccine, the cases of measles decreased a great deal from 1974 to present times.

He showed us that there was a recent spike in the measles cases because of this antivaccination movement that is taking place in America.  He specifically spoke about former Playboy bunny, Jenny McCarthy, who has been extremely influential in her campaign against vaccines.  She was living with Jim Carrey at the time and they appeared on many talk shows where they shared their theory linking vaccines with autism.  Jenny has been telling everyone that her son developed autism one year after he was given the vaccine for measles.

This has caused many problems in the USA as a great number of parents have stopped getting their children vaccinated.  This is what has caused the recent outbreak of the measles.

The number of reported cases of autism has increased a great deal since the 1970s and for this reason, many have linked the two, however, despite many people refusing to get their children vaccinated, autism is on the rise.  There are clearly many factors involved.

A few doctors have tried to link autism and vaccinations by trying to prove that the mercury found in vaccines causes brain damage.  It was later discovered that many of these physicians falsified their research to help prove their theory.

Eduardo gave a stellar presentation and answered many questions from the audience regarding this very contraversial topic. We congratulate him on his very well-researched topic and presentation delivery.

Join us to learn English or learn French in Montreal and we will help you overcome your fear of public speaking and you too can give a winning presentation!