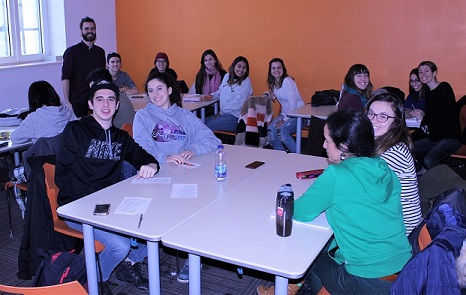 Every Friday, EC Montreal offers free academic workshops to our students.  The workshops include pronunciation clinics, resume writing lessons, debates, round-table discussions and guest lecturers.  Today, we did something a little different.  We offered a workshop on Quebecois expressions.  Just like the English language, French is spoken in different parts of the world and you will find differences not only with slang, accent and pronunciation, but you will find big differences with its vocabulary.

Well, the same is true with the French language.  Although EC Montreal teaches standard, international French, students come across people here in Montreal who speak Quebecois French.  This means that the accent, pronunciation and vocabulary can be very different from those you would hear on a street in Paris.

Our EC Montreal teacher, Fred Paiement, ran the workshop on common Quebecois expressions and terminology.  It was great to see so many students show up to the lesson.

Many differences that exist between Quebec French and European French arise from the preservation of certain forms that are today archaic in Europe. New words were also created for Quebec specialties that do not exist in Europe.

As with any two regional variants, there is an abundance of slang terms found in Quebec that are not found in France. Quebec French profanity uses references to Catholic liturgical terminology, rather than the references to prostitution that are more common in France. Many English words and calques have also been integrated in Quebec French, although less than in France. In Quebec, borrowed English words tend to have the same meaning as the English word. In France they often have a very different meaning; for example, ‘le smoking’ for ‘tuxedo’. Borrowing from English is politically sensitive in Quebec and tends to be socially discouraged.

The students really enjoyed learning about these differences and we are sure they cannot wait to use something they learned with a local Montrealer!

Follow the link if you want to learn English in Canada!