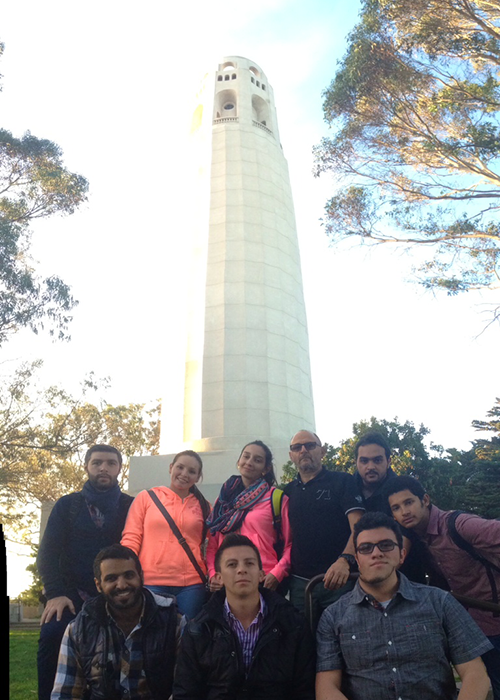 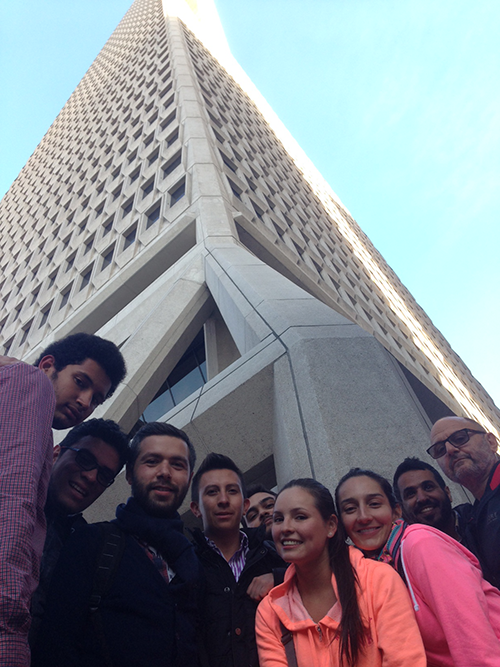 Starting off from school a few of the students asked which public transportation we were taking to Telegraph Hill (aka Coit tower) and I pointed at their feet: “Walking? Really? How far, teacher?”.

“Only 7 blocks from school (ok, and 3 steep ones after Columbus street, hee hee)”.

While we sauntered up Montgomery street,  we had to pause under  the most identifiable skyscraper in SF (foto) the Transamerica “Pyramid” building,  which actually has rollers under it for earthquake stabilization.

We didn’t have time to stop in at my favorite SF bookstore, the legendary City Lights, which was home to the censored Beat generation Jack Kerouac and literary clan, including the owner, Lawrence Ferlinghetti, its owner as well as  the only remaining in Poet/Beat Generation star alive: next  time!

As soon as we began climbing the many staircases, I was impressed when everyone made the +100 steps with enthusiasm .

After pointing out a few big music stars homes and bohemian artists who lived in these amazing hills, we found Coit Tower almost empty, probably because it was closed! Still, the views were stunning at sunset.  We decided to take a few trails on the east side of T Telegraph Hill where smaller gardens and houses/apartments were nestled between the thick trees filled with Amazonian parrots, squawking for joy at sunset and sunrise.

As a reward we happily strolled down a welcoming path towards Washington Park, where Marilyn Monroe wedded SF’s prodigal son, Joe DiMaggio, the first local mega-sports star in North Beach, the Italian part of town. Next time we will explore North Beach’s secret streets and find the perfect cappuccino!