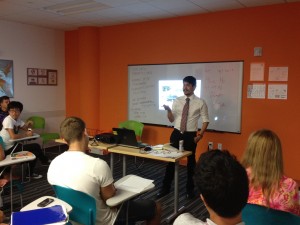 Did you know that in the state of Florida it is illegal to sing in public while wearing a bathing suit? So, that means no more singing on the beach! Today, Juan gave our afternoon classes and some interested students a lecture on crazy U.S. laws. We learned a lot about serious laws that many people debate, such as the drinking age and gun laws, but Juan also told us about a few somewhat ridiculous laws such as the singing one. Keep reading to find out just a few of the ridiculous laws around the U.S.

Many of these laws are completely ridiculous and they are not enforced very often. But, they are still fun to learn about because someone had to “break this law” for it to become a law! Does your country have any crazy laws?