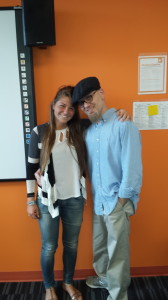 Every month at EC Miami, our students taking academic English courses attend a lecture given by a speaker at the school.  Often, there are speakers that come from outside the school to share their expertise on a variety of cultural subjects.  This month, the lecture’s topic was Baseball in the United States.  The students write an essay based on their notes from the lecture, and then two people are selected as that month’s winners.  First we saw Melissa’s essay.  Now, we have Djodie from our Upper Intermediate course:

The first thing to know about baseball is that it is a more strategic sport than an action.  It is really unique because it’s the only sport that when the team has the ball, they are on defense.

The baseball field is never called like this by people; they say “Baseball Diamond” because the field looks like a diamond.

There are different positions: the pitcher has to throw the ball to the catcher from a distance of 60 feet (20 meters).  He usually does that really fast (0.6 seconds).  One playher was even killed because the ball hit his head.  There are also two boxes (one on the left and one on the right) with three basemen in the field.  Also, there is a shortstop who manages a lot of things.  The home plate or “home” looks like a house.  The ball goes to the first, second, and third baseman and goes home.

The equipment is pretty simple:  only a glove a ball and a bat.  However, the professional players have more protection.

In this sport there is not a referee but one umpire who decides.  He has a mask because he is standing behind the catcher and it could be really dangerous.  There is no clock.  After three “outs”, the team changes and every player has a chance to hit the ball.  Usually the duration of a match is 2 hours and 15 minutes, and they can play extra.

Baseball is the oldest sport in the United States.  In 1845, Alexander Cartwright published the first rules.  Babe Ruth was a big hitter and was extremely famous for his home runs.  He played for the New York Yankees.  Jackie Robinson was the first black man to ever play in Major League Baseball.  He played for the Dodgers.  His number 42 is retired throughout the MLB except on the 15th of April.  When every player wears this number for Robinson’s day.  A movie is about him called “42”.

The MLB (Major League Baseball) is the most advanced league in the United States and in Toronto.  The league is divided in two:  the American and National League.  Three years ago, the Marlins changed the name to the Miami Marlins.  In Florida, there are two teams with the Rays of Tampa, also.  In the Northeast, there is a concentration of teams.  The two most famous in the USA are the Yankees from New York and the Red Sox from Boston who were champions last year.  The MLB process is 162 games per season (five games per week) and after this, eight teams go to the playoffs.