EC Oxford English School student Samir discusses the question of whether modern art deserves to be called ‘art’ at all in an entertaining and wide-ranging opinion piece. 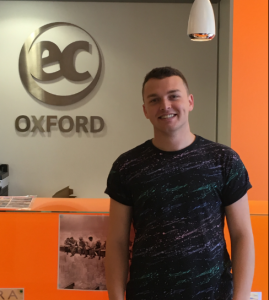 Throughout this century, the definition of art has changed a lot. Artists create completely new works of art. In my opinion modern art is too abstract and I can’t get the point of it. I’m violently opposed to the new style. I believe that the new kind of art can’t evoke as many emotions as the older style.

To begin with, there’s a painting created by Vincent van Gogh called “The Starry Night”. It’s blindingly obvious to me what the piece of art expresses. As soon as you have a glance at the picture, you realise what meaning it has. It’s clear that it shows a view of an idealized village before sunrise. But comparing this piece of real art to modern pieces is utterly impossible!

Let’s talk about the installation called “My Bed” by Tracey Emin. She put her bed, which she had spent a week in overcome with grief after breaking up with her boyfriend, in an exhibition. Guess what happened next. It became a huge sensation. But I don’t know what all the fuss is about. A dirty mattress, a few empty cigarette butts and contraceptive pills might be something interesting for other people, but it definitely leaves me cold.

In contrast, many people are really into modern art. They point to the lessons modern art might be able to teach humanity. For instance, in Candy Chang’s “Before I die” project, people get space for reflection and contemplation and they might realise that they’re not alone and can share something with the wider society.