EC Oxford is an English school with a special link to Oxford University’s Oxford Union. EC Oxford students have a regular opportunity to be trained in debating by members of the Oxford Union, the famous debating society.

But what is studying at Oxford University really like? And how does it compare with ‘the other place’? Rob, our Assistant Director of Studies, studied English Literature at University College, Oxford, and shares his reflections below. 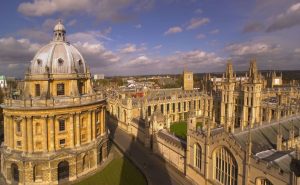 Oxford. A place of tradition and academic excellence. Grounded in a long and eventful history yet also at the heart of cutting edge publications in every academic discipline. The oldest university in the English-speaking world, founded almost a millennium ago in 1096, yet still in the global list of the top 10 universities year on year.

The ‘other place’. Cambridge. And it’s a place that’s very like it in so many ways – from its iconic architecture to its consistency in appearing in the UK’s top three universities and the world’s top 10. Admittedly slightly younger, being founded in 1208 by scholars escaping the inhospitable townsfolk of Oxford, yet just as steeped in history and tradition as its marginally older counterpart.

There is such a degree of overlap between the two institutions, in fact, that they are often referred to by the portmanteau ‘Oxbridge’, from the first syllable of Oxford and the last of Cambridge.

So what makes ‘Oxbridge’? What similarities are there?

First, there’s the system of dividing all students into separate colleges, generally between 300-600 students. These colleges are where you live, study, eat, hang out and provide the ideal conditions for inter-student competitions, from football to frisbee.

Colleges give you the perfect opportunity to get to know people who are studying fundamentally different subjects to you and are the perfect antidote to the potential anonymity of student life.

Second, there’s the term times. Oxford and Cambridge have three terms of eight to nine weeks in their undergraduate courses.

Hold on. How can that be right? That adds up to 24 weeks of academic term time a year, leaving 28 weeks in the year to do what, exactly? It doesn’t sound like the intense scholarly lifestyle you might expect.

Although the luxury of these long vacations shouldn’t be dismissed, this term time set up certainly causes the actual time at university to be immensely full, even hectic. Add to this the fact that the academic deadlines are usually weekly, the academic standards often rigorously high and the sport and social opportunities on offer too many to count let alone attend, it’s safe to say that life in term time is rarely dull!

Third, there’s the tutorial system. A defining feature of the undergraduate courses is the weekly experience of meeting a professor one on one – intimidating to say the least when you’re used to hiding behind your more vocal classmates in school.

Fourth, both universities have an incredible propensity for jargon, which may be considered charming or maddening depending on personal taste. For example, Oxford undergraduates would use the word ‘tutorials’, though these are called ‘supervisions’ in Cambridge. In Oxford, you start the calendar year with Hilary and Trinity Terms; in Cambridge, these are named ‘Lent’ and ‘Easter’. The list could go on and on. Why? Well, perhaps we need to return to where we started: the long history and emphasis on tradition the two universities share.

So the fifth and final similarity is just that: tradition. Whether its punting from the front of the punt or the back, whether it’s waiting until a long Latin grace has finished before starting a meal, or whether it’s wearing a gown like a Harry Potter extra for everything from formal exams to evening meals, tradition is always on hand to turn an Oxbridge student’s daily life into something quirky and idiosyncratic.

And perhaps it’s this long-running parallel history and the still increasing web of subtly different traditions which has perpetuated the other side of the Oxbridge coin: the 800-year-old rivalry between the two universities.

The way Oxford and Cambridge have so much in common creates a sense that they are ‘on the same playing field.’ We see this is literally the case in the Varsity sports matches played between the two, most notably in The Boat Race – the annual rowing race between the two rowing clubs watched by millions. And it’s also obvious in the competition for the best places in the national and international league tables published each year.

The jokey reference by an Oxford graduate to Cambridge as ‘the other place’ and vice versa is a common way of humorously bringing up the distinction between the two: I’m talking about the other place, not here!

What’s actually going on here is in fact the connection between the two centres of learning is being exposed.

If I was talking about London and mentioned the ‘other place’, any number of cities might spring to mind; with Oxford and Cambridge it’s hard to think of one without pairing it with the other.

So is there anywhere like Oxford in the world? Yes. But strangely the similarities between Oxford and Cambridge mean that those attending these universities accentuate the differences.

So here’s to the next 800 years of academic excellence and amiable one-upmanship from these two heavyweights of tertiary education.

And, after all, why wear 21st century attire when you can look like you’re at the university equivalent of Hogwarts School of Witchcraft and Wizardry?